…aaand the game is online. In fact, it has been since Monday (one day later than I wanted it to) and you can play it at Kongregate. Finding good names is always hard for me, so it’s called “Snipe’em up”. Enjoy!

What I’ve learnt: Integrating social APIs is far easier than I feared it was – or, at least, it is with the Kongregate API. Unity is awesome, but I knew that before. Getting visibility (and, thusly, feedback) on Kongregate is pretty hard, unless you actually make it to the very top of the rankings. This looks a lot simpler on other browser game platforms, like Newgrounds and Armorgames, and I might actually go elsewhere with coming games.

On the technical side, I’ve finally gotten some practice with Colliders, something that doesn’t come up too often in my main project, and got some new ideas on how to structure code, especially for very small projects that don’t need much reusability.

And finally, on the game design front, I had some time to ponder how the Danmaku genre works, which was interesting. I’m pretty new to this genre, which I only checked out a couple of weeks ago because slowbeef talked about it on Retsutalk and it sounded interesting and far less hard than it was, so I got Crimzon Clover WORLD IGNITION on Steam. It’s actually a fun journey for me and I feel like I’m getting better all the time.

But enough talk about good games, let’s go back to Snipe’em Up. What would I do different if I had more time? Some nice pixel art instead of the quick&dirty shapes I’m currently using. I suck at pixel art, but could probably manage something acceptable for those few sprites I need in a game of this scope. And the music isn’t really what I wanted to have, but I had to go with what I could got. So, have some epic orchestra music with your black&white GIMP brushes.

Anyway, since I don’t have a usable idea for my next project (with a slightly bigger scope, this time – maybe about one month), I might as well try my hand at a better looking, smoother, longer and more varied Snipe’em Up II. We’ll see. My other ideas are a Horror Metroidvania Thingy, or maybe a purely sprite-based 2.5d train driver arcade game in the style of Densha de Go!. But so far, neither of those two really seems like the right game for me, because both would require substantial amounts of artwork and my artwork sucks, like I said before.

It’s been a couple of days since the last update, and I’m making good progress so far! 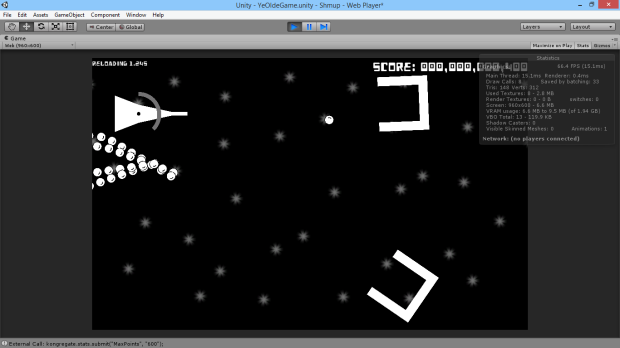 The game looks mostly like I want it to look (except for the player ship that’s going to get a reworking tomorrow). Collision detection works, garbage collection works, the basic game script is in place. I’m still missing the final boss, and also the miniboss I’ve got so far is probably the easiest opponent in the whole game.

The whole thing can be played through in about two minutes – that’ll probably go up a bit with said final boss, maybe to three minutes. But I don’t think somebody who has never played a shmup before will beat it on the first try.

What’s still also missing is a scoring system that actually produces reasonable results and makes getting a high score actually challenging. So far, every run that makes it to the end will have exactly the same score – that’s not really interesting.

Kongregate statistics integration is mostly there and already debugged. Music is in place, as are some sound effects – though one or two of those are still missing.

In total, I have spent about 10 hours with this project, which is less than I hoped to do, but I’m still dealing with The Move™ and searching a job, which takes up some time as well and is the reason I gave me a whole week of time for this. Five hours or so are still missing until the whole thing is finished, I guess.

On a side note, the script that spawns enemies is probably the worst bit of code I ever wrote and I really, really have to share it with you.

END_OF_DOCUMENT_TOKEN_TO_BE_REPLACED

Only one devlog for the first two games of my challenge, because I haven’t gotten around to do much. It’s weekend, dammit. Also, I’m still recovering from The Move™. 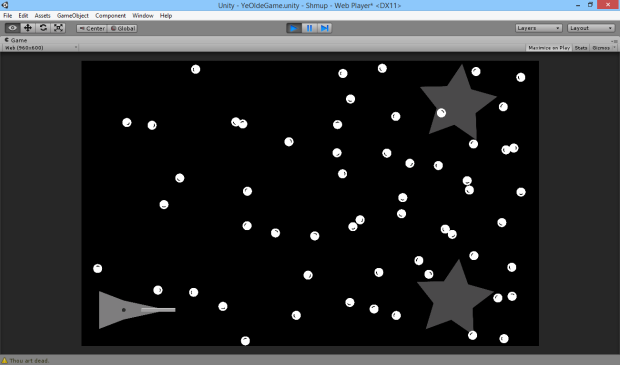 Those stars spawn one bullet every .1 second from one of their tips, and rotate clockwise through all the five tips. Also, the whole star is rotating at variable rates. They’re the only enemy I have so far and were inspired mostly by the Star brush in Gimp. THIS IS ART DAMMIT!

The player can both shoot opponents (which then explode, unless they have hitpoints left), the opponents can shoot the player (who then dies). That’s not much, but it’s a nice framework.

Tomorrow: That parallax-scrolling I wanted to get done today, plus scoring, plus an “encounter script” that controls how which enemy gets spawned. Also, some variation in the enemies. Sounds like fun to me!

Great, just great. I missed another Ludum Dare because it coincides with moves, sicknesses or important tests every. single. time. So here’s what I’ll do: As an aspiring antisocial game dev, I’ll just do my own game jam. Until Sunday, September the 7th, I will develop a game and I will publish it whether I think it sucks or I don’t. With about eleventy RPGs, video games, board games et cetera I have started and never finished, it just seems like the thing to do.

So I’ll develop a minimalist Bullet Hell game. With maybe a couple of twists, which I will try out and see if they work. Not sure with what I will come up exactly, but I’m coding to find out and you’ll be able to read all about it on this very blog.

I’ve already begun working today, but couldn’t devote too much time to it and mostly did really boring stuff: set up Unity project, initialize Git and push it to BitBucket, do basic scene setup, create basic scripts for bullets and moving a character around. Routine stuff, simply put. At least, bullets can already hit the player and the player can fire bullets.